By far Bulgaria’s biggest city, Sofia is one of Europe’s most compact and walkable capital cities, although it’s still one of the least known by foreign travellers. It’s usually bypassed by tourists heading to the coast or the ski resorts, but they’re missing out on something special. Sofia has a young and dynamic vibe, and is becoming a confident and cosmopolitan European capital. The east-meets-west feel is still here, with a scattering of onion-domed churches, Ottoman mosques and Red Army monuments topped with air-punching Soviet soldiers, but these days they share the skyline with glitzy shopping malls, five-star hotels and the best bars and clubs the country has to offer.

Although no grand metropolis, Sofia is nevertheless an attractive and cultured city with plenty to keep you busy for several days or more. Museums, art galleries, theatres, fine restaurants, they’re all here. Sofia is also a surprisingly green city, with huge swaths of parkland within the city boundaries and the ski slopes and hiking trails of mighty Mt Vitosha right on the doorstep.

The city has certainly developed quickly over recent years and a new affluence is apparent in the trendy international boutiques and upmarket hotels. One of the symbols not just of Sofia but of Bulgaria itself, this massive, awe-inspiring church was built between 1882 and 1912 in memory of the 200,000 Russian soldiers who died fighting for Bulgaria’s independence during the Russo-Turkish War (1877-78).

Designed by the Russian architect AN Pomerantsev, the church was built in the neo-Byzantine style and adorned with mosaics and gold-laden domes. The cavernous, incense-scented interior is decorated with naturalistic murals, pendulous chandeliers and elaborate onyx and alabaster thrones.

A door to the left of the main entrance leads to the Aleksander Nevski Crypt . It displays Bulgaria’s biggest and best collection of religious icons dating from between the 5th and 19th centuries, brought here from churches all over the country.

In the construction of St. Alexander Nevsky Cathedral the ground floor was planned to be a tomb for the Bulgarian kings. But none of the kigs was buried there ever. Therefore in 1965 the space under the church was converted into a branch of art National Art Gallery for Orthodox art . 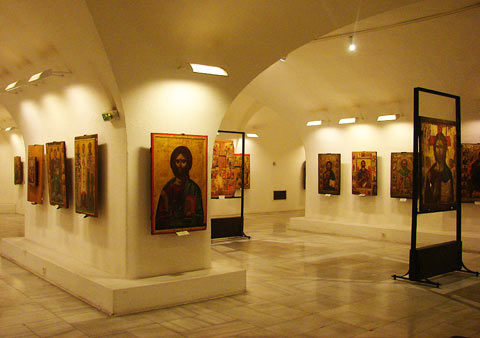 The museum of icons inside the Alexander Nevski cathedral crypt houses what is claimed to be the largest collection of Orthodox icons in Europe. The collection of works covered a long period – the adoption of Christianity as the official religion of the Roman Empire in the fourth century to the Bulgarian National Revival (XVIII – XIX century) and is represented mainly by icons.

The exhibition includes over 200 icons from the 13th to the 19th century, three fragments of wall paintings, engravings and other antique religious artifacts.

A big impressive exposition of icons from all parts of Bulgaria is exquisitely exhibited in the crypt. Artisans and artists have worked for 30 years in order to establish the cathedral crypt where you will admire at 300 frescoes and decorative elements of marble, onyx, alabaster and gold. The Museum of Archaeology hosts the most numerous collections in Bulgaria and its exhibitions reveal it as one of the most important centers in the country for promotion of the cultural heritage of present day Bulgaria.

It occupies the building of the largest and oldest former Ottoman mosque in the city, Büyük camii (“Grand Mosque”), built around 1474 under Mehmed II. The museum was established as a separate entity in 1893 as the National Museum with its headquarters in the former mosque that previously housed the National Library between 1880 and 1893 and a military hospital during the Russo-Turkish War (1877-1878).

The museum was officially opened and inaugurated in 1905, as by then all archaeological exhibits previously kept all over the city were moved there:

Prehistory Hall - located at the lower floor of the northern wing. It displays a collection of items dating from 1,600,000 BC to 1,600 BC. The collection is chronologically displayed and includes various findings from caves in Bulgaria, tools of the earliest humans who inhabited its modern territory, drawings, simple pottery, ritual items and many others. It subdivides into an Early, Middle and Late Paleolithic collection, Neolithic collection, Chalcolithic collection, and Bronze Age;

Treasury - displays grave inventory and other treasures from the late Bronze Age to late Antiquity. Two of the most well-known Bulgarian treasures are located here: the Valchitran and Lukovit Treasures;

Main Hall - located at the first floor of the main building. Hosts a collection of diverse items ranging from ancient Thrace, Greece and Rome to the late Middle Ages;

Medieval Section - located at the second floor of the main building. Includes a gallery of medieval books, woodwork, drawings, metal objects and other items characteristic of the era.