For a Sociologically Grounded Semiotics


Alexandros Ph. Lagopoulos (b. 1939) is Professor Emeritus of Urban Planning at Aristotle University of Thessaloniki, Corresponding Member of the Academy of Athens and Honorary Doctor of Semiotics of the New Bulgarian University of Sofia. He holds a doctorate as Architect-Engineer and a post-doctoral academic title (Habilitation) in Urban and Regional Planning from the National Technical University of Athens and a doctorate in Social Anthropology from the Sorbonne. He has served as vice president of the IASS-AIS and is honorary president of the Hellenic Semiotic Society and the Association Internationale de la Sémiotique de l’Espace. His research interests include social semiotics, the anthropology of space, and the semiotic spatial models of precapitalist and contemporary societies. Major publications: Structural Urbanism: The Settlement as System (in Greek, 1973); The City and the Sign: An Introduction to Urban Semiotics (ed. with M. Gottdiener, 1986); Meaning and Geography: The Social Conception of the Region in Northern Greece (with K. Boklund-Lagopoulou, 1992); Urbanisme et sémiotique dans les sociétés pré-industrielles (1995); Semiotics (4-volume anthology edited with M. Gottdiener and K. Boklund-Lagopoulou, 2002); Heaven on Earth: Rites of Sacralization of the Traditional Greek Settlement and Their Origin (in Greek, 2003); and A History of the Greek City (ed., 2009). 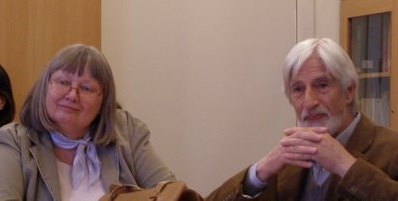 Karin Boklund-Lagopoulou (b. 1948) received her doctorate in Comparative Literature in 1976 from the University of Colorado at Boulder. Since 1981 she has been teaching medieval literature and literary theory in the School of English at Aristotle University of Thessaloniki, where she is now Professor of English Literature. Her publications include a monograph, I Have a Yong Suster: Popular Song and the Middle English Lyric (2002), and papers on literary theory and medieval literature published in Greek, European and American journals and collective volumes. She frequently collaborates with her husband, co-authoring Meaning and Geography: The Social Conception of the Region in Northern Greece (1992) and co-editing the anthology Semiotics (2003) with him and Mark Gottdiener.