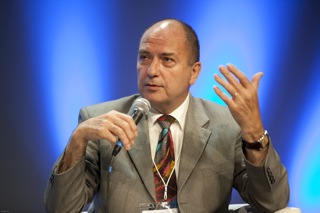 And I was recently, from 2012 to 2014, Advisor and Director of personal Staff of the French Minister of Higher Education and Research.

I have published over two hundred and forty issues or books, in the fields of theoretical semiotics, literary semiotics, visual semiotics, rhetoric and general linguistics. Some of them have been translated into several languages (English, Spanish, Portuguese, Italian, Russian, Korean, Arabic, etc.).

I was visiting professor or guest lecturer in twenty and four American, European, Asian and African universities. I directed forty doctoral dissertations; most of my former PhD students now hold faculty positions at universities in Europe, Asia, Africa, South America, USA and Canada.

Here are some reflections and proposals about the future of IASS-AIS, in view of the election to the Presidency.

Semiotics has recently reached many new countries, and new semiotic societies have been established in many countries. IASS-AIS has to increase this movement.

The publishing continues actively; SEMIOTICA flourishes under Marcel Danesi and his staff. New journals have appeared like SIGNATA in Belgium , “Signs and Society” in Hankuk University (Korea) and Brandeis University (Massachusetts); in China several new issues in semiotics appear, in Sichuan University, in Tianjing University and many others.

But the power of great monopolistic publishers is increasing, and IASS-AIS has to encourage all semioticians to participate in the global “open access” publishing, which is a great opportunity for new or emerging semiotic associations, particularly in South Countries.

In Europe one major issue has been the opening of SEMKNOW, the pan-European doctoral program in semiotics in Tartu, Turin, Sofia, and Lapland. The program is open in all these universities since 2013. It contains many new facets and a strong job-market orientation, and professionalization of the semiotician’s work. IASS-AIS has to conceive and set up other international programs for the employment of PhD holders.

We may recall what Roland Posner was saying in 1995: he defined five recommendations.

1. New programs for the teaching of semiotics at schools, colleges, universities under the auspices of the IASS-AIS : it’is running !

2. International cooperation in semiotic research must be intensified on a regional basis by setting up local networks and semiotic research groups, with the support of frequent IASS-AIS Regional Meetings : we need continuing this support.

3. IASS-AIS has to encourage encounters between the specialists of different disciplines within the humanities, the social sciences, and the natural sciences, and, especially, across the boundaries of these groups of disciplines, so as to allow new semiotic insights to appear. The IASS-AIS was supposed to establish a system of Special Interest Groups and project-oriented joint ventures, each involving several disciplines. This proposal seems to me very topical.

4. To create synergies between semiotics and related interdisciplinary approaches (e.g. Cognitive Science, Communications Research, Ethology, Ecology, Pragmatics, Hermeneutics, Aesthetics), IASS-AIS will set up long-term organizational relations with the international associations that are charge of these approaches. Joint projects will be initiated and joint congresses organized. It is the case, but may be reinforced.

5. Innovative ideas must receive the attention of as many semioticians as quickly as possible: an IASS-AIS E-mail Circular has been created.

I return to interactions with other areas of scientific research. Eero Tarasti has often highlighted the difficulties faced by semiotics to be recognized as a discipline among the others. Today, in international research programs, a discipline is only recognized as a discipline if it is able to participate in the treatment of a collective scientific problem, with an original contribution, and if possible, a contribution which appears complementary and necessary to solve the common problem.

Today, to be recognized as a discipline and to exist in international research programs, semiotics needs to be able to collaborate with other scientific fields, including with technological sciences, and able to offer creative and relevant solutions to answer key questions that men and societies arise. Semiotics have to be able to understand and deal with the problems that our contemporaries are facing across the globe.

We need to make room for these large multidisciplinary issues with other disciplines in the research programs supported by IASS-AIS, as well as in congresses and conferences organized with the label of IASS-AIS.

I said some words about SEMKNOW, the pan-European doctoral program in semiotics, funded by European Union. Such programs may increase the number of PHD in semiotics. So we have to prepare the future of our semiotic students.

The professional future of our PhD students depends in part on the ability of our semiotic communities to develop and promote their professional skills and all the professional missions that may be assigned to them. In most countries, more than half PhD holders become experts, consultants, managers, directors, executives in a very wide range of agencies, organizations and businesses, and not only teachers and researchers.

The labor market is generally limited to national borders, and this role could be primarily entrusted to national semiotic associations. But the job market is becoming more international, and especially for high-level executives, and more and more for all professions dealing with semiotic PhD holders.

The IASS-AIS can play a role in the internationalization of career opportunities for our doctors, opening a section on its site, and conducting promotional campaigns about high-level professions to which semiotic doctors can access.